Danish Falcon Spider lifts are used across the globe for maintenance works ranging from airports and shopping malls to theatres, among many others. While Falcon lifts are familiar to experts the world over, the company behind the lift remains unknown. With this in mind, TCA Lift A/S has now decided to change name to Falcon Lifts A/S.

“It’s perfectly natural for us to change name to Falcon Lift A/S and reap the benefits of an identification between the name of our most well-known lift and the name of our company,” says Finn Schlitterlau who, together with Thyge Mikkelsen, is co-owner and director of TCA Lift A/S, henceforth to be called Falcon Lifts A/S.

The name change will signal a clear and sharply defined profile to customers worldwide and will contribute to fulfilling the company’s growth ambitions in the coming years. Asia in particular is a promising growth market, witnessing as it currently does a flurry of construction activity, including a series of new airports and shopping centres.

The Falcon Spider lift was first developed in the late 70s. Since then, over one thousand lifts have been manufactured and the design is continually updated and refined. The structural appearance of the Falcon Spider is reminiscent of a spider and it is in high demand for building maintenance work. For example, Falcon lifts were used at Copenhagen Opera house, Suria Mall and Twin Towers in Kuala Lumpur, Dubai Airport, Bangkok Airport, Manila’s Asian Mall and will soon be seen at Axel Springer Verlag in Berlin.

“The change of name and a strong profile underline the importance of communication in achieving growth. Falcon Lift has always been a technological leader in the sector. We are now boosting our communication front to make clear to the world who Falcon is. This will help us succeed in our goal of becoming the market leader,” says Chairman of the Board, Jens Heimburger.

The Falcon Spider has enjoyed widespread global success because it is lightweight and can access confined spaces, but it can also expand when the space allows it. For example, it can enter through a door that is less than a metre wide and two metres high. The lift is produced in various sizes with lifting heights ranging from 29 to 52 metres. The end of the lift holds a basket from which the operator can carry out any required tasks.

“We see really great opportunities for the Falcon Spider to enjoy even more widespread usage around the world. Partly because of the present boom in high-level construction projects in and around cities across the world, and partly because maintenance requirements for buildings become ever more demanding,” says Finn Schlitterlau.

One characteristic of all Falcon lifts is that they are very light and can be driven on surfaces such as marble and wooden flooring. Low weight combined with great flexibility and a wide range of applications makes Falcon lifts a unique tool for rapid and efficient maintenance work both indoors and out.

The lifts can be used to polish a building’s glass facades or windows, for major painting assignments, for electrical repairs and more. Customers choose Falcon lifts not only because they lead the field in technology and safety, but also because they are competitively priced.

Falcon Lifts develop, produce, deliver and maintain the lifts. All Falcon lifts – wherever in the world they are put to work – are assembled and approved in Denmark by 42 highly specialised employees.

Where does the name Falcon originate?

The Falcon name originated with the company that invented the lift in the early 1970s. The name of the company was E. Falck Schmidt – commonly called Falck Schmidt. The company’s initials, FS, were then used when naming the Falcon Spider.

“In future, the Falcon name will belong to both our lifts and our company, and it’s wonderful that Falcon lifts today are well known and respected for their unique qualities and are seen as an exceptionally productive tool for maintenance jobs around the world,” says Finn Schlitterlau.

Photo: From left, Finn Schlitterlau and Thyge Mikkelsen, co-owners and directors of TCA Lift A/S, which in future will be known as Falcon Lifts A/S. 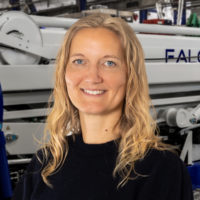